Chain of Fools - a book review 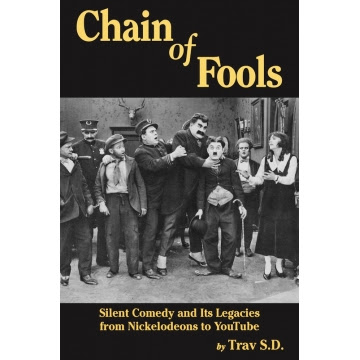 Chain of Fools is one of the finest books ever written on silent film comedy.  It is a guide to an art form and a technological revolution, and a survey of popular history in a most exciting era where the scientific wizardry of the film industry fed the demands—and put on a pedestal—the desires of the common man as it never has since.
The author is Trav S.D. a theatre historian whose previous book No Applause, Just Throw Money: The Book That Made Vaudeville Famous—well, everything you need to say about that is pretty much all in the title.  Our erstwhile guide—you may sometimes see him in an appropriate pith helmet as would a proper guide wear—also writes an exceptional blog, “Travalanche.”  He is also a performer and playwright, and has written for a number of publications, and is also a public speaker and radio guest.
Chain of Fools is notable not only for its extensive and impressive research, but that the scholarly tone is frequently punctuated like a pie in the face with the author’s humor, as well as his thoughtful reverence for this era of film.  What is most pleasing is that this is, to great extent, no longer a “lost” art form.  In his opening passages, Trav S. D. recounts his early interest in silent comedy as a young man which, like for so many of us back in the day, was an infrequent treat on a television that only got three channels.  Then the deluge of the VCR, the DVD, the Internet—and (as we bow our heads and genuflect) TCM.  As Trav joyously puts it.
Silent comedy lives more vigorously now than at any time since it passed out of favor over eighty years ago.  Ironically today’s film buffs are in the enviable position of being far closer to the great silent comedians than were the audiences in the immediate wake of silence’s demise in the late 1920s.
For those just learning to appreciate silent film comedy, Chain of Fools is a delightful and fascinating compendium, and a valuable tool for film bloggers and those who are more familiar with the history of silent film.  I especially like that he sets the films and their movie clowns in the context of the era, explaining in a natural way how each influence the other.  Here you have the back stories on Chaplin and Fairbanks, and the “Our Gang” kids.  Here you have the triumphs and a few tragedies of the lesser knowns.
Referring to the ultimate demise of silent film as “The Dialogue Diaspora” (I really like that), the author takes us past tired clichés of the whys and wherefores, and brings us to a new and thoughtful understanding of how these silent film veterans influenced comedians for decades to come, through the early days of television and beyond.
I am impressed with Chain of Fools, and enjoyed the rollicking prose that lures the reader into this remarkable world of silent comedy, its roots, and its legacy.
Chain of Fools is available in paperback here from Amazon.
And from the publisher, Bear Manor Media here.

NOTE:  This review was written in exchange only for a review copy of the book provided by the author.
Posted by Jacqueline T. Lynch at 7:39 AM