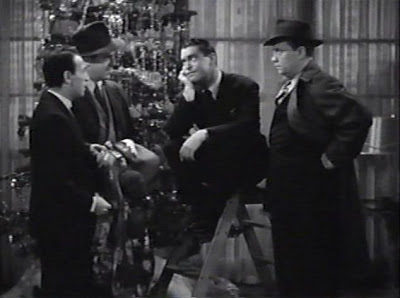 “Alias Boston Blackie” (1942) is the third in this series of 14 B-movies starring Chester Morris.  This one adds a yuletide flavor to the fast-paced action, though there is no peace on earth until the bad guys are rounded up.
This week we look at A Very Gumshoe Christmas.  Thursday we’ll discuss “Lady in the Lake” (1947).  Because both films are mysteries, there’ll be no plot spoilers.  That’s my Christmas present to you.  Instead, we’ll have a look at how both movies use symbols of Christmas. 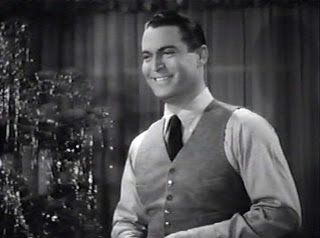 Boston Blackie originated as a popular pulp novel series, then to silents, and then to this long series of B-movies begun in the 1940s starring Mr. Morris, who got his start on stage, had some success on Broadway, and later on did lots and lots of TV guest roles.  His film career started off well in features, but then he slipped into the B-movie morass and never quite got out of it.  He is a lively, rugged, and glib Boston Blackie, a former jewel thief and safecracker who is now on the side of good. 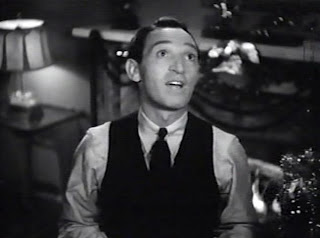 George E. Stone plays The Runt, his right-hand man and valet, also a former crook.  You may recognize him from his role as Andy, Warner Baxter’s right-hand man in “42nd Street” (1933). 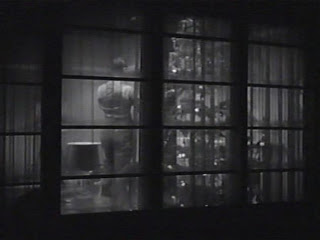 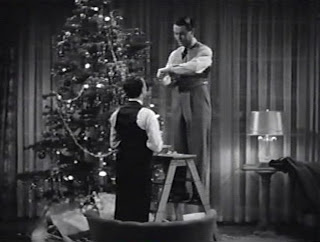 You see him here delicately flopping handfuls of what some of my relatives would call “the really good tinsel, with lead in it, so it hung right.” 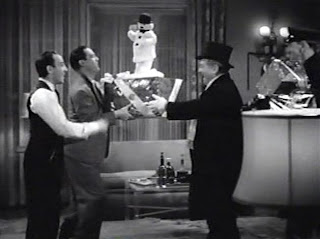 First, a few presents.  Then the story.
Boston Blackie and The Runt are off to prison tonight, but only as a good deed.  They are taking a vaudeville troupe to perform for the convicts on Christmas Eve. 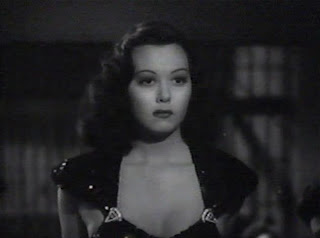 One of chorus girls, played by Adele Mara, has a brother in the Big House, and she’s worried about him.  He keeps threatening to break out and go after the two mugs who sold him out.  He claims he was framed and is innocent. 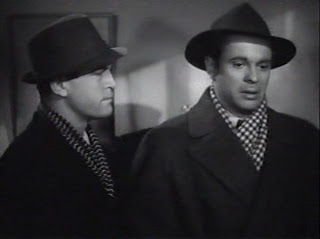 Her brother, played by Larry Parks, who you may remember from his much more famous later role in “The Al Jolson Story” (1946) used to be a vaudeville acrobat.   This comes in handy when he jumps a clown, puts on his clown suit and makeup, performs some really neat acrobatics for the audience of mugs, and sneaks out of prison on the same bus as the vaudeville troupe.  It’s not easy, because the dogged Inspector is along, played by Richard Lane.  The inspector is always hounding Blackie, though their relationship is equally friendly as it is adversarial. 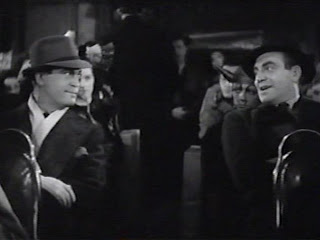 Blackie tells him, “Every morning when I shave I expect to find you in my tube of soap.  And when I come to something hard in the turkey stuffing tomorrow, I’ll look for your head.”
Keep an eye out for a young Lloyd Bridges, who is the bus driver. 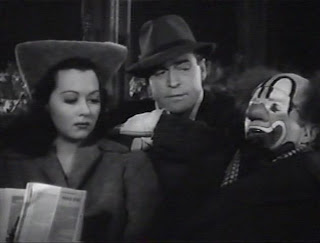 Blackie suspects something’s up.  Hmm, there’s something familiar about that clown.  He knows for sure when Larry Parks, after a very sloppy fight, steals his clothes.  Blackie is left in his unmentionables.  You know Christmas is starting out badly when a very angry clown takes your suit. 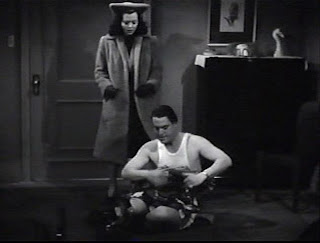 A fun movie, with clever shell games and with lots of twists and turns.  Literally, when the final chase sequence begins in the hunt to find the two mugs Larry Parks wants to kill for framing him.  Boston Blackie, the Runt, and Adele Mara steal a motorcycle and sidecar, and eventually a black and funereal-looking ambulance, crash through some obligatory fruit stands and nearly drive over a sidewalk Santa. 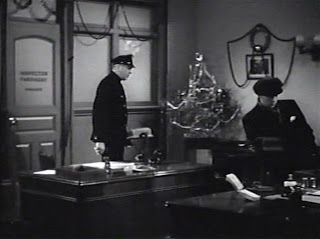 Santa is a reminder-on-the-run that it’s Christmas Day.  We also have a neat little tree in the lobby of Adele Mara’s hotel, and a cozy little tabletop tree in the police station.  Just warms your heart, doesn’t it?
But none can compare to the magnificent evergreen towering over the furniture and the party guests, which include the Inspector (good will toward men, after all), at Boston Blackie’s party. 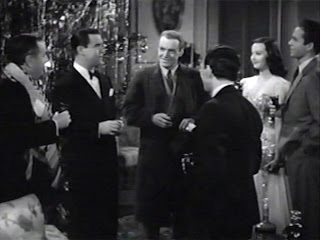 Even tough guys celebrate Christmas.  We’ll see more of that in the innovative manner Christmas images are used in the unusual “Lady in the Lake” on Thursday.

Posted by Jacqueline T. Lynch at 7:46 AM

Loved this post! I recorded this a while back but had no idea there was a Christmas theme, thanks for alerting me to that!

I've become a fan of Chester Morris, he made the most of the parts he got, sure added a lot of pep to "B" movies.

Love Adele Mara too, she's always fun. You may know she was married to TV producer/writer Roy Huggins; her brother, Luis Delgado, was James Garner's stand-in and assistant for many years.

I'll have to check out this film. It sounds like fun.

Oh how I wish I'd seen this, I could have included it in my post today...! And of course I forgot LADY IN THE LAKE takes place at Christmas. Old lady memory strikes again!

I wonder if I can find this Boston Blackie on youtube. Sometimes you can find the unlikeliest movies there for free viewing.

Great post as usual, Jacqueline. I love Boston Blackie, used to watch all the films (and The Falcon and The Saint, etc.) all the time on Channel 11 in NY.
Growing up in Manhattan, that is. :)

Gracious,I had no idea there were so many Boston Blackie fans afoot. Thank you all. Laura, I had no idea of the connection between Adele Mara and Roy Huggins and Luis Delgado. Always fun trivia.

I hope you catch the movie soon, Georgie Lee, and welcome.

Yvette, I haven't checked YouTube, but it wouldn't surprise me if you could find it on there. Series films are fun, but I've only caught a couple Boston Blackies. I still want to see half the Charlie Chans I'm missing. Great "5 Quirky" Christmas movies post.

What a delightful pick for the holidays! I enjoy many of the "B" detective film series, most notably The Falcon, The Crime Doctor, and Boston Blackie. Chester is ideally cast as Blackie and the mysteries are swiftly paced.

I agree Chester Morris is well cast as Blackie. The series was really pretty fine-tuned and well produced. "The Falcon" has a lot of fans, and I suspect might be more popular.

Excellent job, Jacqueline. This is probably my favorite BB film, after the first one, "Meet Boston Blackie."

Love that giant Christmas tree, especially for someone like me, with a small house and nowhere to put a big tree. I have is what can charitably be described as a Charlie Brown tree.

Happy holidays to you and all your readers.

Thanks, Kevin. I like big trees, but have had many table-top trees as well. We do what we can, and even Charlie Brown trees are festive with the right attitude.

Happy holidays to you yours, Kevin.

Jacqueline, I'm a big fan of Chester Morris and the Boston Blackie movies, even though it always bugs me that the women in these films have an annoying habit of double-crossing Blackie! :-) Nevertheless, this one is among my favorites, clown drag and all. I totally enjoyed your sprightly review! Viva Blackie and Runt, and Merry Christmas to you and yours from all of us here at Team Bartilucci HQ!

Thanks, Dorian. It's true Chester Morris can't trust a dame in these movies. A very Merry Christmas to Team Barilucci as well.