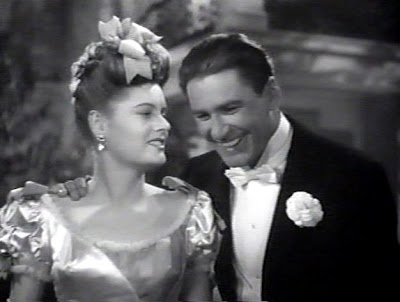 In her first of four films with Errol Flynn, “Dive Bomber” (1941), discussed in this previous post, Alexis Smith refused to kiss him -- for artistic reasons, she said. Even before that, contention occurred in her first important movie close-up in a major film -- when he stole the scene. 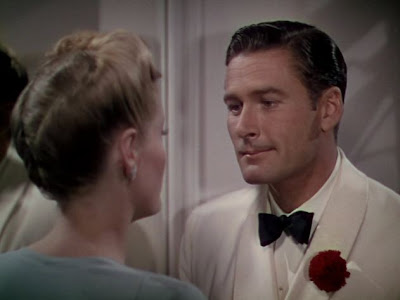 “Alexis was distraught. She ran to her dressing room, tears welling in her eyes and convinced her opportunity had been lost forever…When she returned the next morning…she walked into her dressing room and saw a note in front of her make-up mirror…on his own personal stationery, Errol had written a note of apology so sincere in appearance that if she wanted to be angry she could be so no longer. ‘It was that Errol Flynn charm,” she explained. (The Two Lives of Errol Flynn by Michael Freedland, article syndicated in The Lakeland (Florida) Ledger, August 14, 1979, p. C1)

“…there is no true friendship like that between a man and a woman, especially if platonic.” -- Errol Flynn, My Wicked, Wicked Ways (p. 359.) 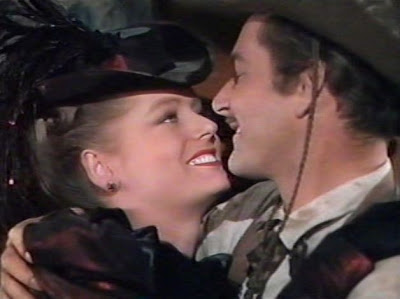 “Errol was a movie idol of my teens,” Miss Smith says, “And when I was playing opposite him I was intimidated. I came to like him genuinely.” Films in Review article by Lennard DeCarl, (June-July 1970, pp. 360-361.)

It is often repeated on Internet sites that Errol Flynn was the best man at Alexis Smith’s wedding to Craig Stevens in 1944. This is an error. Stevens's best man was Major John E. Horton, Stevens’s friend. Flynn was only one of some 300 guests at the Church of the Recessional, Forest Lawn. (St. Joseph (Missouri) News-Press, June 1944, p. 2.)

He did, however, take it upon himself to perform a special duty. After the ceremony, he “…took Craig aside, as though he were my father, and told Craig that if he didn’t treat me right he’d have to answer to him.” Alexis Smith, DeCarl article, (p. 361).

“On “San Antonio”…he cared for Alexis’s welfare. If he thought director David Butler was demanding too much of her, he made it very plain he was on her side. ‘Steady, old sport,’ he would tell Butler, ‘the lady’s only human.’ She, for her part, did her best to cover up the excesses of his drinking, which was anything but easy.” Freedland, (p. 161).

On Flynn’s being diagnosed with a mild heart attack during “Gentleman Jim” (1942): “She pulled him aside and said kindly but firmly: ‘It’s so silly, working all day and then playing all night and dissipating yourself. Don’t you want to live a long life?’ Errol was his usual apparently unconcerned self: ‘I’m only interested in this half,’ he told her, ‘I don’t care for the future.’” Freedland, (p.108). 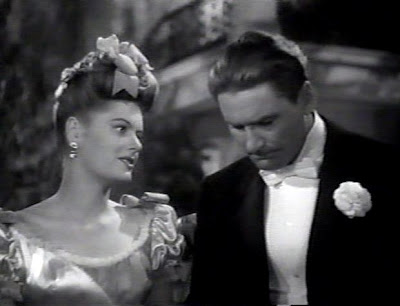 “…a woman friend is the best friend you can have. In my early days I was brought up to hear it said that you can never have a real woman friend, that male friendship is deeper, like Damien and Pythias. That is not true -- not in my book. I have had two great friends: I still have them. They are so far superior to male friends, so much more understanding, so much more generous in feelings.” Errol Flynn, My Wicked, Wicked Ways (p. 398.)

“Although Flynn was renowned for having affairs with many of his leading ladies, his relationship with Alexis was strictly platonic. ‘He had feelings for her, but he also had great respect for her,’ Stevens said, ‘He treated her with dignity, respect and humor. He never made a pass at her.’"  A few months before his death, Flynn finally confessed his true feelings to Alexis. ‘When he was making ‘Too Much, Too Soon’ he called one day,’ Stevens said. ‘I answered the phone and he said, ‘Hey Old Boy, is your lady there?’ When Alexis got on the phone he asked if she would meet him at Warners for lunch. She said, ‘Of course.’ The next day when she came home from that lunch there were tears in her eyes…He told her that he knew he didn’t have much longer to live…‘He wanted to tell me how much he enjoyed working with me and also that he loved me.’ She never forgot it.'” Interview with Craig Stevens, The Women of Warner Brothers by Daniel Bubbeo (McFarland & Company, Inc. Publishers, Jefferson, North Carolina, 2002, p. 215). Alexis Smith, Ida Lupino -- another very close platonic woman friend of Errol Flynn’s, and many Hollywood figures attended Flynn’s funeral in October 1959. The ceremony was conducted at the Church of the Recessional, Forest Lawn, where Alexis and Craig Stevens had been married.

“Errol Flynn was an extremely bright man,” she says reflectively, “He had a great zest for living, of course, and a great sense of humor about himself as well as the world. But he was very intelligent and sensitive, and as anyone who worked with him will tell you, a very good actor. I think he was underrated.” Interview with Alexis Smith, article by Jamie Portman, (The Montreal Gazette, September 21, 1981, p. 49)

Below, a rare opportunity for them both to sing -- their real voices -- in “Montana” (1950), the last film they made together.

“Women make better friends than men: good, really honest friends. When the going gets tough, give me a woman for a friend. If they happen to care for you they will go farther than any man.” Errol Flynn, My Wicked, Wicked Ways (p. 398) 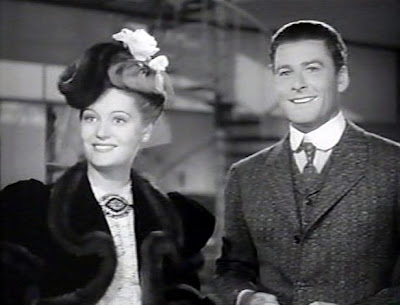 Flynn never actually names those two great women friends in that amazingly gentle paragraph in his otherwise rolicking, hedonistic autobiography -- to protect them from the taint of a cad's reputation, perhaps?﻿

Note: Both "Dive Bomber" and "Montana" will be shown on TCM tomorrow.

Special thanks to Laura of Laura's Miscellaneous Musings for the heads up several months ago on Daniel Bubbeo's book The Women of Warner Brothers.

Posted by Jacqueline T. Lynch at 7:37 AM

A lovely tribute, and you found so many great quotes!

I was really touched by the story of their last lunch as recounted in the WOMEN OF WARNER BROS. book. Very glad I could point you in the direction of that one!

Thank you again, Laura. I enjoyed Bubbeo's book -- though I did catch a couple errors in the Alexis Smith chapter (I'm not as familiar with the backgrounds of the other ladies) -- but the idea of writing a chapter on all the female stars of that studio in that era is fascinating. The similarities in careers and characters they played, the many differences in their private lives. It's a great perspective on the studio system.

Looking forward to the lineup on TCM tomorrow, there's a couple I haven't seen. If anything goes wrong with my recorder or my cable, you may hear a loud, piercing scream.

What a lovely article, Jacqueline. Even as much as I know about Flynn, I never knew this. When I was just a kid and loved him, I always thought he would be such a good and fun friend ... it's nice to know that he chose so wisely in his really good friends - women.

Very informative, well-researched post! I always thought Errol and Alexis had a nice easy-going chemistry together. He and Greer Garson were good friends, too.

Thanks, Becky and Rick. Errol had many sides to him, and though his autobiography is famous for its wild stories, what struck me most was the serious passages about this subject, and also about his regrets about his career and self doubt about his acting ability. He really wanted to be a good actor, but was not always given roles to prove himself.

Yes, he certainly did admire Greer Garson as well. He called her "fun and helpful" in "That Forsyte Woman" and they had a great rapport.

One might guess that Errol may have placed women into two categories: the kind you take to bed and the kind you put on a pedestal. That's an oversimplification, but he did have issues as we know.

This is a lovely tribute to friendship. It's so refreshing to read something positive about Errol Flynn and some of the women in his life. Thanks for posting this.

Thank you very much. Errol's charm is so strong on screen, I guess it is sweet to discover it wasn't all illusion.

This is so sweet! As a huge Olivia de Havilland fan, I always hear about how Errol ruthlessly went after his ladies, but it's so lovely to hear about this side of him. Thanks for taking the time to validate Errol's heart!
Lara

Thank you, Lara. Errol Flynn was, I suppose, a more complicated man than only the rogue he would have us believe him to be. It's fun to catch a different glimpse of our favorite starts sometimes.

I accidentally found this site. Errol Flynn is unforgivable, even after all these decades. He is one-of-a-kind and larger-than-life. RIP.

Thank you so much for this lovely article -- Flynn is still so misunderstood and underrated. When looked at objectively his career is almost incredible. Who watching Captain Blood can keep in mind that he was 25 years old, and that this was his first starring role?

Welcome to the blog, Linda. A very good point about his work on CAPTAIN BLOOD. He shows great mastery of the craft, and a really magnetic screen personality. I guess he was destined to be a star.

It's nice to know that Errol Flynn could make a distinction between the women he leered at and a genuine lady friend. Even having just one female friend like that is worth it.