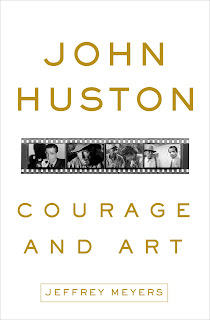 “John Huston - Courage and Art” is a new biography of the larger-than-life Hollywood director (and writer, and sometimes actor) by Jeffrey Meyers.

Mr. Meyers is no stranger either to biography or the Hollywood or literary greats. His numerous books include works on Humphrey Bogart and Ernest Hemingway, who the author notes figure prominently in John Huston’s life and work. To some extent this new book and his previous biographies dovetail in themes and certainly in research. The book is fast-paced, very readable, although sometimes repetitious. It is a good introduction into the psyche of John Huston, but the catalogue of his passions, which were many, and his attention span, which was brief, don’t leave as much room for a detailed analysis of his films, which is what appeals most to film buffs.

John Huston, son of the famous stage and film actor Walter Huston, was estranged from his parents in childhood, and also suffered from poor health such that he was made to understand he would die young. From that point, he lived a live as full and daring as anyone possibly could, which left him at the end of his (actually) long life with a string of accomplishments, and with a line of wives and lovers, and children with whom he could or would not connect emotionally.

Nevertheless, they, as others did, found him a charismatic man whose bravest act of all was perhaps just daring to tell stories no one else told in a spare, artist’s manner no one else tried.

“John Huston - Courage and Art” by Jeffrey Meyers is published by Crown Archetype.

NOTE: A free copy of “John Huston - Courage and Art” by Jeffrey Meyers was provided to me by the publisher for review purposes.
Posted by Jacqueline T. Lynch at 7:36 AM

Sounds interesting, Jacqueline. I read Huston's autobiography, An Open Book, a few years ago and was stunned by the amount (and variety) of living he managed to pack into his years. But I later read elsewhere that Huston's book wasn't all that "open." I imagine the Meyers book, though maybe not as colorful (Huston was a great storyteller) is more thorough.

Biographies, as well as autobiographies, are often subjective and none is as complete a record as advertised. It's nice to have a wealth sources to give us a more rounded picture of any famous person. What Mr. Meyers' book contains that Huston's autobiography obviously cannot is an account of what happened to his estate. Interesting.

I admit I am not a fan of John Huston though on screen he was certainly fascinating. Oh well, now that I remember, I loved him in THE WIND AND LION where he played opposite Brian Keith, who was Teddy Roosevelt.

But I'd heard things about his private life that were kind of odd.
He was not an 'easy' man. A man's man, I suppose. Those types aren't always very likable.

To each his own I always say.

I did love many of the movies he directed, though. And I wonder about his estrangement from his parents as a child.

Thanks for the review. I might take a look at this. :)

This sounds like a really intriguing book, Jacqueline! He's such a fascinating character, I'm going to look for this book. Thanks for your review!