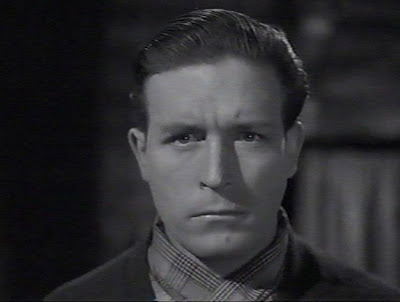 “Dillinger” (1945) is a fast-paced “B” movie that stands out as the first dramatization on the life of real-life gangster John Dillinger, and takes much of its energy from the infamy of his headline grabbing career.

What seems most interesting about this movie, apart from the rather psychopathic characterization actor Lawrence Tierney gives his character, is the not-quite-documentary, not-quite-noir look of the film. It is missing that stylish, guilty-pleasure treatment of the more famous gangster films of the 1930s, such as the very film John Dillinger saw just moments before he was gunned down by FBI agents in 1934: “Manhattan Melodrama” with Clark Gable, William Powell, and Myrna Loy. Have a look at our discussion of that movie here.

The capture and killing of John Dillinger occurred July 22, 1934, only some 11 years before “Dillinger” was made, at Chicago’s Biograph Theater. Have a look here for photos and our recent discussion on the Biograph. 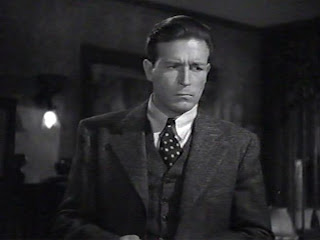 This absence of the kind of gangster as charismatic screen icon that made careers for James Cagney, Humphrey Bogart, and could not tarnish Gable’s romantic image, might be an indication how much films had changed in a decade, for we were now on the cusp of the grimmer post-War world.

Though the real John Dillinger was reportedly not the psychopath Lawrence Tierney modeled him to be, the post-War film seemed to have done with bank robbers as Robin Hood figures, whose problems stemmed from troubled childhoods on the wrong side of the tracks, who needed only the love of a good woman and a helping hand from a friendly priest to set them on the path of salvation…even if that conversion began only on death row.

Mr. Tierney gives a riveting performance, if not as John Dillinger, then as a reasonable facsimile of a guy hell-bent to make his mark on his particular world. 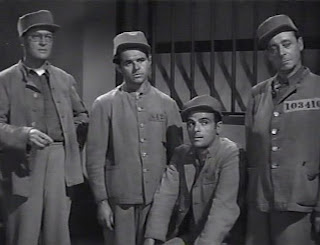 At the film’s beginning, he is on a date in a café, and is humiliated because he hasn’t enough money. When petty crime gets him chucked into jail, he meets much smoother, professional crooks and learns from them. Boss of the gang, “Specs”, a “bank man” is played by Edmund Lowe. Eduardo Ciannelli, Marc Lawrence, and Elisha Cook, Jr. who we last saw in “Shane” here, round out the gang. These men are fictitious characters, based on Dillinger’s real associates, but no real names or situations are used. Some scenarios are manipulated for dramatic effect. For instance, later on in the film, Tierney carves a gun out of a piece of wood while in jail (how a fellow inmate got a knife to whittle is not explained), and breaks out when the guard thinks it’s real. Actually, John Dillinger did once escape from a jail when his lawyer smuggled into him a wooden gun.

Tierney is paroled before the rest of the gang, and he smuggles weapons to them so they can break out of prison. There is a power struggle between him and Edmund Lowe, who is the senior member of the group. Lowe is eventually dethroned by Tierney when the men give him their confidence as a result of Tierney’s imaginative and successful bank robbery schemes. 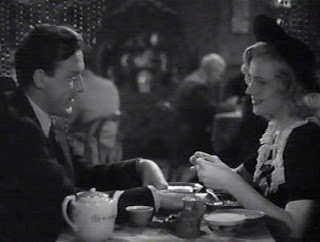 Tierney meets a sassy girl at the ticket booth of a movie theater (foreshadowing of his eventual end), and though he at first robs her, she refuses to pick him out of lineup for the police. We next see them having dinner together. For a guy who has not the charm of a Cagney, Powell, or Gable, we might wonder how he does it, what she sees in him. But, we never learn much about Helen, played by Anne Jeffreys. She’s just a gun moll along for the ride. 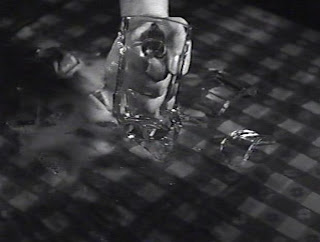 A chilling scene is when Tierney goes back to the café where his crime spree began and faces the same waiter who humiliated him. He invites the waiter to join him in a glass of beer, which the waiter happily does. Tierney reminds the waiter who he is, smashes his beer mug, and grinds the broken edge into the waiter's face while a jazz pianist in the background plays louder. We don’t actually see the violence of course, but that split second when the jagged mug is thrust into our faces as Tierney aims right for the camera, is enough for us to gasp and imagine what happens next. 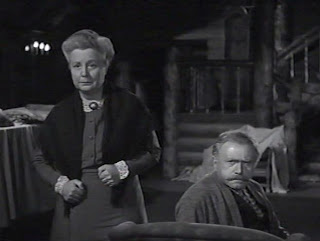 Once free, and with a few bank robberies under their belts, the gang goes on the lam and hides out in the backwoods resort of Elsa Janssen and Ludwig Stössel. These two veteran character actors seem to be perennially married in the movies, as they were in “Pride of the Yankees” (1942), and “Casablanca” (1943), and others. Elisha Cook, Jr. calls them Mom and Pop.

When Eduardo Cianelli grows restless in the rural hideout and complains of the noise of the crickets, Edmund Lowe sarcastically fires back, “Why don’t you complain to John? He’ll knock them off for you.” The gang is growing nervous about Dillinger’s fits of temper and his readiness to use his gun. Soon, he shoots Edmund Lowe dead, kills another for trying escape the hideout, and when Elisha Cook, Jr. is killed in a heist, Mom and Pop show a little gumption and try to call the police on the phone. Tierney murders them both. 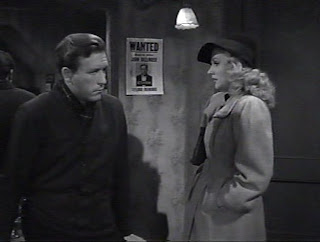 All alone, he hides back in the city, shut up in a one-room flat with his own wanted poster on the wall for a decoration. It’s Christmas 1933, and we hear kids in the depths of the Great Depression singing “Silent Night” around a street Santa. Somehow that quiet scene, that gives Dillinger and us a chance to catch our breath and reflect, seems more evocative of the era than anything else in this movie.

Cut to six months later, June 1934, and he has grown his familiar mustache (though Tierney looks nothing like Dillinger). Stir crazy and out of cigarettes, he says to Anne Jeffreys, “Let’s go to the movies.”

Though it’s a black and white movie, we are informed Miss Jeffreys’ dress is red. This is to foreshadow again the actual circumstances (though much twisted) of Dillinger’s demise. He was turned in by the so-called Lady in Red, but in real life this was not his girlfriend at the time; it was a brothel owner, originally an immigrant from Europe, who made a deal with the FBI to lead them to Dillinger in exchange for not deportng her. 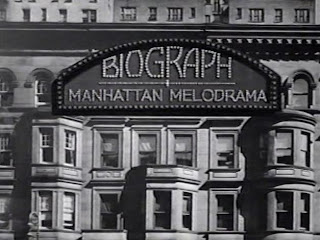 We see Tierney, nestled in a dark movie theater, enjoying a Mickey Mouse cartoon, and it’s almost like shades of chain gang prisoner Joel McCrea in “Sullivan’s Travels”. We are not shown “Manhattan Melodrama”, likely for legal reasons, as that was an MGM film. Even the marquee of the Biograph looks nothing like it actually did.

When Dillinger leaves the movies, he is shot dead in the alley, with the same $7.20 he had in his wallet as at the beginning of the film.

“Dillinger” is a hybrid between something documentary and something noir, and never really achieving either, but it was explosive enough in its day to draw the criticism of religious groups, and to be banned for two years from being shown in Chicago by the Chicago Censorship Board.
Posted by Jacqueline T. Lynch at 7:34 AM

I haven't seen "Dillinger" in a while, but I remember feeling that it wasn't able to fully capture its era. Maybe it just didn't capture the era as I know it from bigger budgeted films.

Tierney certainly had a scary screen persona. He's one of those guys that would make me cross the street if I saw him heading my way. On the other hand, his brother Scott Brady seemed like a guy you wouldn't mind having a drink with.

Hi, Caftan Woman. You've pegged it about not capturing its era, which seems odd since its era was only the previous decade. We move on in our timeline, and we move on faster than we sometimes realize.

This was hugely popular in its time, and my dad remembers this playing at one of the lavish downtown Chicago theaters for a long time. He remembers it not necessarily for the film, but because it came from Monogram Studios, and their films rarely played the big first-run theaters. Plus, the Chicago connection didn't hurt.

Monogram didn't have the money to be period-specific. They were interested in moving the product, and they got their money's worth out of this one.

Dmitri Tiomkin, of all people, wrote the score, and it's one of my least favorite Tiomkin scores. Lord, is it noisy.

But I still like the film, despite all the flaws Jacqueline accurately points out.

Thanks for stopping by Kevin, and for the info about "Dillinger" in its Chicago run.

Despite it's B-movie weaknesses, I do think Tierney's screen presence, and that of Edmund Lowe, were memorable.

Lawrence Tierney was always such a hard-nosed, hard-boiled actor. I liked his son, Scott Brady, much better, though he too, had that 'likely to fly off the handle at any moment' edge to him - even when he played heroes. Though he was never as stern-jawed as his dad. :)

Loved your in-depth review. I've never seen DILLINGER that I can remember and don't think I want to.
I'm not one for films about gangsters, never have been.

Probably why I've never seen THE GODFATHER movies and the like.

Just not for me.

But I still appreciate you writing about this film. :)

Yvette, that Seinfeld episode is a hoot, taking into account the kind of volatile characters Tierney played, and was in real life. George and Jerry were scared of him for good reason.

The Godfather movies, I think, harken back to the stylish gangster films of the 1930s, not gangster as hero, exactly, but gangster as more than just a one dimensional type. I inevitably get drawn into that series just through the evocative sets and costumes. It's an eyeful.

I agree that Tierney is good, but neither he nor the script capture Dillinger based on what I've read. For that matter, neither does the later Warren Oates movie. I think the essential Dillinger pic is yet to be made!

Thanks for commenting, Rick. I agree, like many biographical movies of the day, the subject quickly becomes a fictional character. I can't recall if I've seen the Oates movie, if I did it was years ago. I did not see "Public Enemy #1" (2009), but I'm glad that film took a hand in restoring the Biograph marquee.