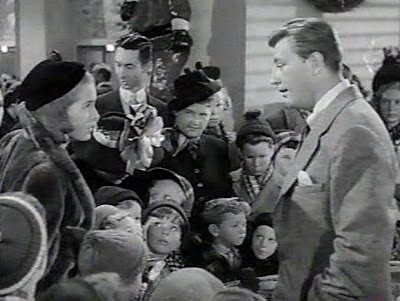 “Holiday Affair” (1949) could almost be an extension of the “war stories” series we did a couple weeks ago, with its examination of a war widow still fighting the good fight on the home front. The trouble is, the war’s over and she cannot make herself move on. 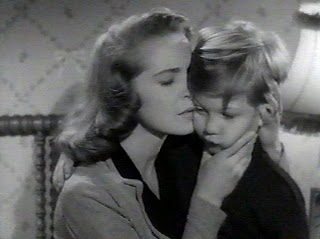 Janet Leigh plays the single mother of little Timmy, played with all-American boy golly gosh sweetness by young Gordon Gebert. Master Gebert has a cute line when, given a present he especially wanted, replies, “I’m so happy if I was a dog, my tail would be wagging.” It’s something a six-year would say.

A war widow, Janet Leigh still keeps the lamp in the window by subconsciously, and sometimes consciously, raising her boy to be a replacement for his father, and by not allowing a new husband and father a place in her heart. 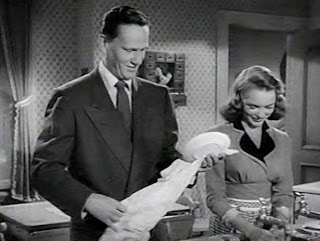 Not that Wendell Corey isn’t trying. He plays her attorney beau, a steady, nice guy with an easy, intelligent manner who waits patiently for her to accept his marriage proposal, washes the dishes with her, and meanwhile works hard at being Timmy’s pal. Timmy is ambivalent, for his mother is raising him to be, like her, self sufficient and needing nobody but each other. 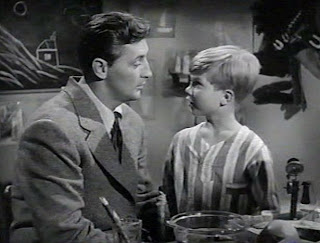 Enter Robert Mitchum, just as good at being a charming sweetie as he is being a sadistic scary guy. Who’d have thought? He and Miss Leigh cross paths in a department store, and continue to cross paths throughout the movie in situations both coincidental and contrived. He wins Timmy over first with his playfulness and man-to-man camaraderie, but Janet Leigh is more resilient. He has to hammer home some painful truths to her before she allows the war to be finally over.

I like the scene where Mitchum and Corey ruminate on how it doesn’t seem to snow as much as when they were kids, and how Corey muses it might have something to do with the atom bomb.

As we mentioned in our last post on “The Shop Around the Corner”, we’re looking at a commercial Christmas in these posts. What had been a cozy and quaint 1930s gift shop on a snowy Budapest side street in that movie becomes a bustling downtown post-war department store here. The kind of scene for which many old movie buffs are, in these days of mega malls and online shopping, nostalgic for, despite how the inconvenient dressing up and taking a cab downtown would seem today.

We love this old stuff, but I wonder if we have the guts and stamina, and patience for it?

Particularly clever is the use of electric trains, the iconic Holy Grail of Christmas presents, and also a foreshadowing of a cross-country train trip Mr. Mitchum intends to take to start his life over. 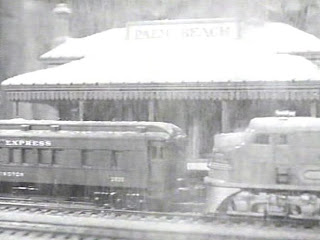 When the opening credits roll, we are shown a train barreling by, and as the camera pans back from the countryside, we see that it is nothing more than a toy electric train setup in a store toy department. Robert Mitchum takes center stage, part Pied Piper and part pitchman, as he demonstrates the marvelous toy trains to the rapt audience of kids. He is a salesman here, a hero to his young customers, a bane to the suspicious floorwalker who keeps an eye on him. 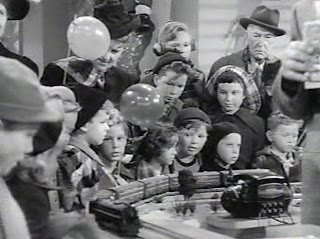 Janet Leigh buys a train, but not for her little boy who would kill for one. She is a comparison shopper incognito, a kind of commercial spy who investigates prices, quality of merchandise, buys trains and then returns them. Mr. Mitchum is on to her, but when he fails to report her to the manager, his floorwalker nemesis turns him in, and he’s fired. Out of job at Christmas.

His dream is to travel to California and work at a boat building business, but he needs the dough to get there. Still, he buys Timmy the train he won’t otherwise get for Christmas, and puts himself next in line behind Wendell Corey for Janet Leigh’s hand in marriage. If she can just realize the fact that she’s free to marry. 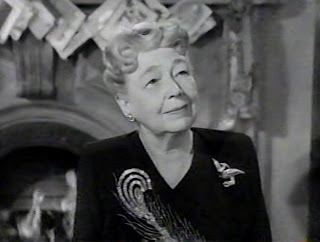 A couple of good scenes are the Christmas dinner with Janet Leigh’s in-laws, a kindly elderly couple, played by Esther Dale and Griff Barnett, doting on the grandson who reminds them so much of their deceased son. Wendell Corey and Robert Mitchum also have seats at the table, and for a while it’s very pleasant how these grownups behave so grown up, suppressing their own angst and desires for the sake of Christmas. 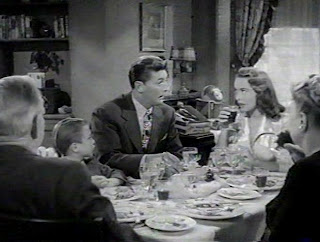 They give toasts, and when it’s Mr. Mitchum’s turn, he frankly states his case, in lawyer-like fashion, to the lady and her lawyer that he wants to marry her. Rarely has a personal confrontation come off as so classy.

It’s also a punch in the gut for Wendell Corey to have to sit through it, for Janet Leigh who fears it, and for her in-laws, who gamely suffer the logical discussion of who is better to be their grandson’s next father, a replacement for their son.

Another good scene is when Mitchum calmly blasts her between the eyes with self knowledge at its most uncomfortable, of what she is doing to herself and her son by not letting go of her widowhood. 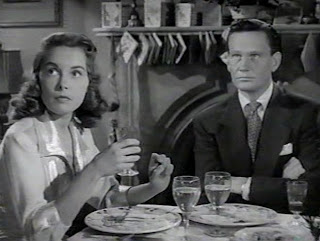 Likewise when Wendell Corey breaks off with her, acknowledging to her what he has known for some time, she just doesn’t love him. It’s killing him, but he faces it stoically. Neither men try to beat each other’s time; they just want the facts which Janet Leigh is too frightened, or guilty to face.

Just before the end credits roll, we see a real train trip and watch Robert Mitchum take off on his new life adventure, but not alone. Just as at the beginning, the camera pulls back and the train cleverly becomes a toy again on a new train setup with tiny palm trees of his California destination. It’s like “Holiday Affair Meets Gumby.” 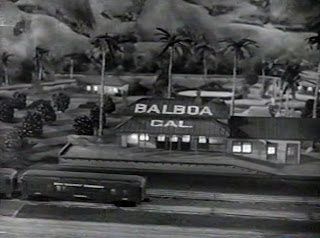 By the way, this film was released on Christmas Eve, 1949. In this previous post, we covered how most Christmas-themed movies were not released during the holiday at all.

Thanks for shopping with me this week. And for carrying the packages. You can put them down, now. For those who celebrate Christmas, I wish you a peaceful and pleasant holiday.

For all readers of this blog, I have a gift (should you choose to accept it, as they used to say on “Mission Impossible”). For today only you can order my novel “Meet Me in Nuthatch” FREE from Smashwords. This is an ebook, which can be downloaded to any ebook reader in different formats, and can also be downloaded to your computer and read on your computer without needing any Kindle or Nook or other ereader. When you go through the checkout, put in this coupon code: JQ29S -- and your book will be free.

Merry Christmas.
Posted by Jacqueline T. Lynch at 7:53 AM

I haven't seen this. Off to Netflix...

Isobel Lennart's screenplay has moments of real truth amidst the romantic movie conventions. It's what makes "Holiday Affair" such a worthwhile re-watch.

I love this movie! I saw part of it today and was reminded how much I like Esther Dale and Griff Barnett as the in-laws. They seem very real.

Merry Christmas, all. I agree the movie has some tantalizing moments of "real truth" amid the holiday fluff. I especially like to see Esther Dale all dolled up. We usually see her as aunties, maids, landladies or uncredited nobodys, but I like the grandparents in this movie, and that we get a glimpse of their long, happy marriage.

What a treat! I'm older woman and worrying about retirement. This took me back to the good years. I absolutely have always loved Robert Mitchum, and have met him twice. He was a wonder and never got enough credit for the fantastic man he was. The child actor was quite good, as they were usually rotten in those days. I had to read about him (Gebert). Janet Leigh was always a fav, but I know she had a not so good life (lived how the movie people directed her to live) even though her daughter has made a hit on her own. (Remember, Tony Curtis?). Anyway, I think the movie was billed as "A Christmas Wish." Right now, I feel like writing a piece for my writer friends "I Love You, Robert Mitchum!" Thanks for the treat...thought the movie was going to be a bummer...it was uplifting.