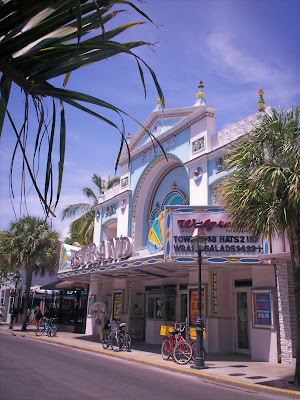 Art imitates life? Maybe. Opening in the mid-1920s, The Strand closed in the early 1980s. According to this website, it opened as a nightclub, and then became a Ripley’s Believe It Or Not Museum in 1993.

The building closed in 2002, but is now open as a Walgreen’s, which restored its damaged marquee in an unusual and fitting manner to display its own advertising.

According to the Cinema Treasures website here, many other elements of its original interior were to be saved. From the IMDb site, we learn that this building was used in the 1993 film “Matinee” with John Goodman, a comedy where a film promoter releases a horror film here during the Cuban Missile Crisis.

It may not be often that a theater gets to star, especially when it’s no longer a theater at all.
Posted by Jacqueline T. Lynch at 7:31 AM

What a wonderful facade!

The "pub" in The Quiet Manonly became an actual pub within the last year or two. Up until then it was a sort of general store in Cong, Ireland called Cohan's only because that was the name of the pub in the film. The owners kept the name for the pub (the real one).

Hi, K. Thanks for the info about the Cong, Ireland pub and "The Quiet Man." I suppose that's an example of what I've heard called "film tourism" or something to that effect, where people go to a place that isn't necessarily genuine, just because it was featured in a movie or TV show, and that location takes on a new life of its own because of it.

Of course, people also travel to real sites that were shown in films. I think there's a "Vertigo" tour of San Francisco. But I guess it's a different thing entirely when the location you're visiting was only pretend.

I wonder - is this a Walgreen's policy?
Here in SF, many of these drugstores are in gorgeous old buildings. Sure they remodel, but I'll bet a lot of these buildings would be demolished if they'd been bought by some other business.

Welcome, Shahn, and thanks for stopping by. That's interesting about the San Francisco drug stores, I had no idea. I hope some of our other readers can let us know if a similar re-use of older buildings is happening in their towns. I hope so. Thank you for the info.

I'm glad Walgreens decided to refurbish the marquee of the theatre. In Los Angeles it seems like the city has no respect for history and is willing to let architectural treasures to be torn down. With all eco/green talk going on you think more companies would be willing to reuse existing buildings rather than starting completely from scratch.

Your web site is outstanding!

This blog entry is about Fred Kelsey who appeared in some "Three Stooges" movies:

Thanks for stopping by, and congratulations on your interesting website on Sandusky, Ohio.

Believe it or not, I worked at the Strand Theater where the outdoor scenes from the movie "Matinee" was filmed in Key West sometime between '71 and 72! My best friend was the ticket girl and sat in the bubble booth. I was the soda girl. My stand had an opening out into the street and people would always walk by and talk. Truly a social event in those days ! How cool

Wow! Thank you so much for sharing that experience with us, Soda Girl at the Strand. How cool is right.

I worked there in the 80's when it was a nightclub. Very strange as the building in the movie really looks nothing like The Strand. The outside ticket booth and the stairs yeah maybe but the rest I don't recognise. What a beautiful place that the town allowed to be destroyed! The town is so commercial now I don't even desire to go back.

I'm so pleased we're getting such a wealth of history and personal memories of the Strand. I know what you mean about the theater being difficult to recognize in the movie. I should track down a copy and put up a before and after screen capture sometime. Key West is pretty commercial now, but that's the evolution of a tourist-based economy, I suppose.