A Guy, A Girl, and a Typewriter 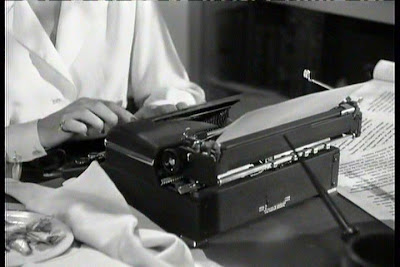 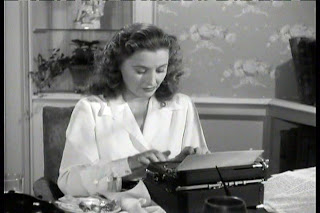 The typewriter and shapely hands above belong to Barbara Stanwyck, one of film’s most prolific typists. We see her here in “Christmas in Connecticut” (1945) as she bangs out her magazine column. 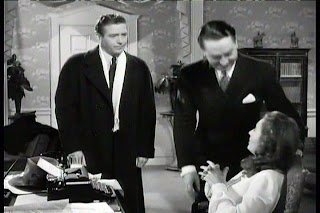 Here Reginald Gardiner is just about to swoop down and give her a kiss, because he’s nuts about her and because her typing is driving him wild. Understandable, for there are few things more sensual than typing, few physical attributes more desirable than the strong yet supple fingers of the typist.

In the Sherlock Holmes story “The Solitary Cyclist”, Sir Arthur Conan Doyle has Holmes appraise a woman’s hands, noting that she is either a typist or a pianist, "I nearly fell into the error of supposing that you were typewriting. Of course, it is obvious that it is music. You observe the spatulate finger-ends, Watson, which is common to both professions? There is a spirituality about the face, however" -- she gently turned it towards the light -- "which the typewriter does not generate. This lady is a musician." 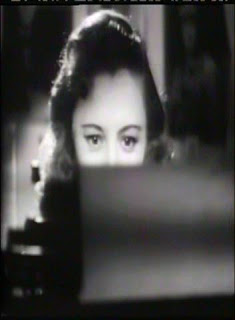 How wrong he is, that typing on the QWERTY keyboard does not convey a certain spirituality, even passion. If he could see this close-up of Stanwyck’s eyes from “Meet John Doe” (1941), Sherlock would know just how wrong he was. 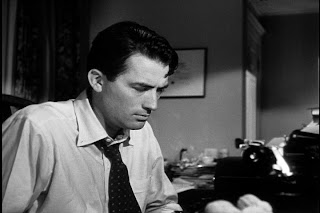 But passion through typing is not solely the province of ladies in film. Here Gregory Peck in “Gentleman’s Agreement” (1947) shows us what virility looks like: a handsome man brooding in front of a typewriter. Below we have the picture of motherly pride as Anne Revere fondly thinks to herself, “That’s my boy who can type.” Medical school? Bah! She sacrificed everything to put him through two semesters of Typing 101. 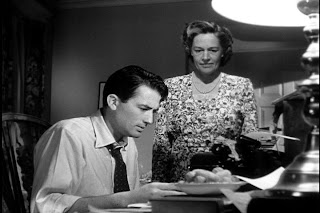 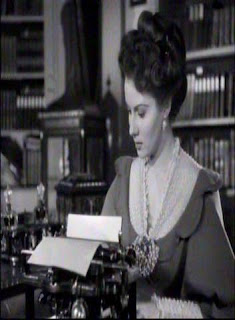 Here we have Rhonda Fleming in “The Spiral Staircase” (1945) showing that Edwardian ladies were every bit as sexy as the modern girls at a typewriter. 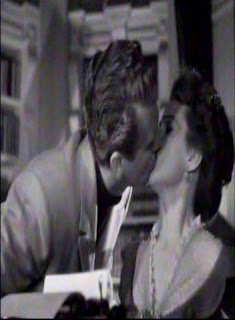 Here Gordon Oliver can’t resist planting a kiss on her. One of the first things he tells her when he enters the scene is to plead, “Don’t stop typing.” 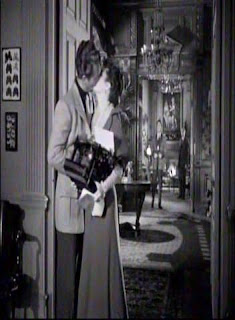 Here the ménage à trois is complete as Rhonda attempts to dance with her typewriter and Gordon Oliver cuts in. 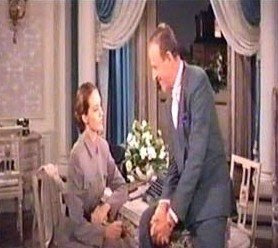 Typewriter passion is easily transferable to musicals, seen here in “Silk Stockings” (1957) where Fred Astaire’s immediate attraction to Cyd Charisse is due to her ability to type. 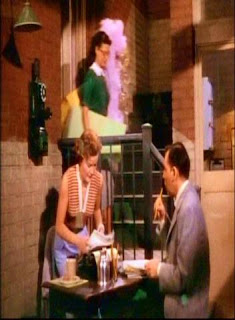 And even less glamorous couples find romance if left to themselves in a small secluded corner with a typewriter, as is the case here in “The Band Wagon” (1953) with Nanette Fabray and Oscar Levant. There is nothing like a typewriter to bring new life to a marriage in a rut. 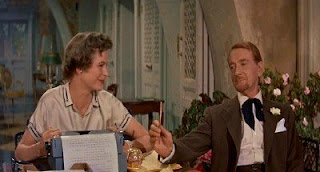 Amid all the froth of “Three Coins in a Fountain” (1957), the only genuine passion comes from the unlikely duo of Dorothy McGuire and Clifton Webb, again because of the typewriter. He is a writer who dictates, and she is a typist who receives his words and produces the pages. Their relationship is interdependent. How many such lovers have thrilled to the ping that warns of the approaching right margin, and the grinding crank of the carriage return? Their need for each other is occasionally accompanied by a need for carbon paper and Wite-Out.

Film noir also explored the relationship between typing and sex, in “A Lonely Place” (1950) when Humphrey Bogart, a screenwriter, begins a relationship with Gloria Grahame that becomes more steamy when she starts to do his typing for him. I’d put up a screen capture for that, but I hear those kids coming back into the room. Everybody shut up.
Posted by Jacqueline T. Lynch at 7:32 AM

Jacueline, a very witty post indeed. I love the Conan Doyle citation. Isn't the typewriter the only peice of "complicated machinery" that historically has been used mainly by women? Office girls and typewriters...hmmm. One could perhaps say that the machine (naturally) was constructed by men, but intended for exquisite female fingers to fiddle about with, as if it was an extension of the male body... But in that case Gregory Peck may just have a well concealed homoerotic encounter :))

Jonas, you raise an interesting point, about the typewriter being used mainly by women. Your theory about it being an extension of the male body is intriguing. I believe there are a number of retired old maid typists reading this and swooning right now.

Raquelle, I seem to have lost your comment due to some error I must have made. I apologize, but your suggestion of a new meme on this subject might wipe out the entire classic film blogging community with exhaustion brought on by extreme silliness.

Exhaustion brought on by extreme silliness in the movies, hey, that could be another meme.

I remember a scene in Shocking Miss Pilgrim where Betty Grable is typing away (she's the sole female in the office full of males) and all the men turn to look to get an eyeful of a bit of ankle and leg. Sexy!

Just in addition - Blogger seems to be losing a lot of comments lately. I've found I've needed to repost some.

Oh but if you tagged, it would have given me an excuse to write a list! Auw man. I'll have to just write it on my own I guess. Here is to extreme silliness!

Raquelle, I'm glad you came back. I left the porch light on for you, hoping you would. I forgot about "Miss Pilgrim", dang. I guess that means your tagged. Take it away!

What an original analysis. Consider yourself linked on Citizen K.