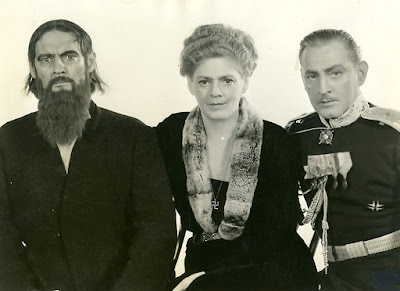 Rasputin and the Empress (1932) is a watershed film in a couple of different respects. First, it unites on film for the only time all three of the Barrymores. Secondly, due to Hollywood’s (or, at least in this case, producer Irving Thalberg’s) penchant for changing history in a movie about a historical subject to suit the needs of script, a lawsuit gave us the immortal movie words, “All the characters in this film are fictitious. Any resemblance to persons living or dead is coincidental,” or words to that effect.

In the first case, bringing all three famous Barrymore siblings together in a film was a treat for filmgoers of the day and a gift to posterity. Before their film careers, they represented the next generation in America’s pre-eminent theatrical family. A dynamic, tempestuous, and talented generation it was. Since this blog is about the history of film and not theatre, it is enough perhaps to say that the names above the title of Rasputin and the Empress were listed simply, and boldly, as:

The audience needed no explanation. This was an all-star lineup, the dream team.

Younger son John, the longtime matinee idol, played Prince Paul Chegodieff, friend of the royal Romanov family. Middle girl Ethel plays the Czarina Alexandra, and oldest child Lionel plays the monk Rasputin, a rapacious and slovenly mystic whose ambition leads him into hypnotizing members of the royal family when he is not engaging in debauchery. Ethel is the heartsick mother of little Czarevitch Alexis, who suffers from hemophilia. Rasputin’s influence over the mother as he works, so he says, miracles with the son will bring down the Russian nobility.

The performances, particularly Ethel’s, are theatrical, and there is quite a bit of newsreel footage of czarist peasants and soldiers to attempt a documentary feel despite obvious errors in the telling of the story. Czar Nicholas’ autocratic administration of his country is glossed over, and this instead becomes the story of how John as Prince Paul, a good guy, has to get rid of his brother Lionel, the mad monk in whom his sister Ethel has so much faith.

The siblings’ scenes together are fun to watch, as they are clearly masters at stagecraft and that is what we are seeing here more than scene stealing. In a scene with John and Lionel, as their characters spar psychologically, Lionel as Rasputin declaring, “I will be Russia!” while John listens thoughtfully, his back turned to him, playing with a rapier. Both brothers are strong actors, neither giving an inch, but also respectful of each others talents.

“There’s something clammy about him,” John says of Rasputin, and describes him, “Like a man-eating shark with a Bible under his fin.”

Lionel does some impressive just-short-of-scenery-chewing here. He clearly has the meatiest role. He is disgusting and creepy. There is a particularly unsettling scene where he forces the young czarevitch, played by Tad Alexander, to watch an ant and a fly at combat under a microscope. The audience is forced to watch as well with intense close-ups as the ant attacks and eats the fly, which Rasputin uses as a teaching tool for political theory.

Another creepy scene is when he gets one of the royal daughters aside and places a locket on her, touching her, like a molesting uncle, and she squirms with discomfort but utter helplessness. Like the cavalry, the lady in waiting played by Diana Wynyard comes to her rescue. An early fan of Rasputin, she begins to change her opinion of him and chases him away from the daughters, when he also tries to hypnotize her so that he may have his way with her.

This, evidently, was the sticking point for the lawsuit against the film. A scene, removed later, suggesting she is raped by Rasputin was decried as false by the real-life counterparts of Prince Paul and her character, who was his wife. He sued; he won, and now we are told that the movie we are watching is fictional. Even if all the names and places and events are real, it’s still fictional, that way we can still make up stuff.

An impressive and realistic fight scene between John and brother Lionel illustrates the death of Rasputin by gunshot, poisoning, beating, and finally drowning. Rasputin was like the Energizer Bunny, but he finally succumbed, and John is the only Barrymore sibling to survive the Russian Revolution, as sister Ethel is massacred with the rest of the Romanovs.

There are a lot of character actors to pick out, and many were uncredited in the film, including Anne Shirley as Princess Anastasia, who later came to life as Ingrid Berman in another film, and Mischa Auer as a waiter. Movies depicting historical events and real people always seem to walk a fine line between creativity and accuracy, but this film that gives us the three Barrymores together is a historical document all by itself.