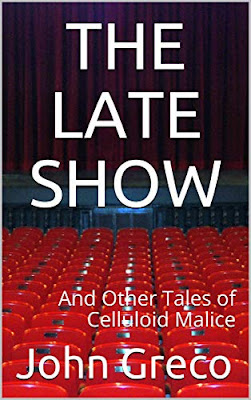 Hat's off to fellow classic film blogger John Greco of Twenty-Four Frames for publishing his newest collection of short stories.  The Late Show - And Other Tales of Celluloid Malice offers readers a shadowy world where eight tales of crime and horror share a tantalizing link -- there is in each of them a hint, or taste, or even an obsession with movies.

Some of the stories have an ironic, Hitchcockian sense of humor to them, some have a surprise ending, and all are geared to fans of crime fiction who also have a familiarity with the pop culture world of film, especially classic film.

Here's a preview of coming attractions (or what we in the book biz call a blurb):

Eight dark short stories all with two things in common - Movies and Malice! Murder, revenge, greed and more are now playing. In the title story, Margaret Allen's husband is addicted to movies and she cannot take it anymore. Frankie Bosco's on the run after killing two people. With the cops chasing him he ducks into a movie theater showing two James Cagney films. Plus six more stories that may make you change your movie habits.

Congratulations to John on this new short story collection!  The book is on sale here at Amazon in either eBook or paperback.

For more information, have a look here at John's website.

He is also a talented photographer whose work can be viewed and purchased on this site.
Posted by Jacqueline T. Lynch at 7:41 PM

Yes! That's what I've forgotten to do!

Get right on it, Paddy. You're welcome, John. Best wishes for good sales.

Congrats to John for this publication!