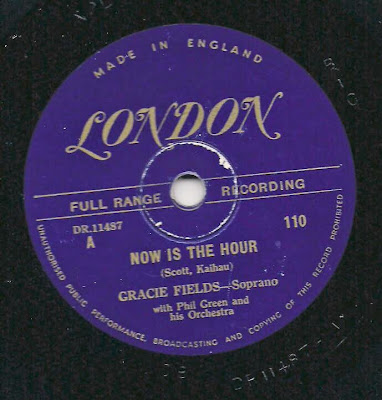 For the next two weeks we're going to be discussing three movies that tell war stories. By “war stories” in this case we mean what are typically called home front movies. I think that the term home front usually implies a lack of conflict or danger. During World War II, most home fronts around the world were in a very great deal of danger, except for the United States. Our conflict was internal. 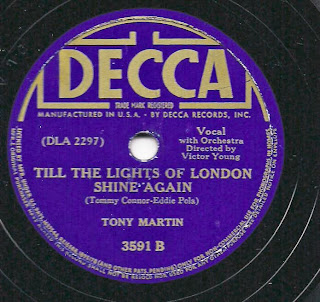 Without wanting to be too pedantic about it, I’d like to emphasize that The War (one senses when a member of that generation speaks about it, it’s always in capital letters), was more than setting or timeframe in these films; it was another character, like The Fates proclaimed by an ominous Greek chorus back in the days of Aeschylus. One railed against it, plotted to deceive it, tried to escape it, but in the end, The War determined everyone’s fate.

A typical “war movie” that shows battle is its own milieu. There are many fine battle films we can cover at some time in the future. But battles, however dramatically staged, are still staged. I believe the home front movies are the “war movies” that really show with a degree of reality what The War did to define that era. 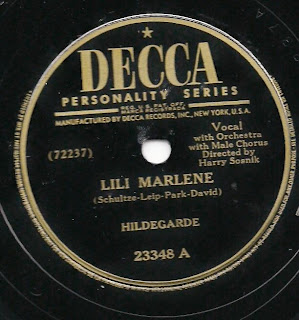 Hollywood’s interesting conundrum was to address The War through an industry that was largely devoted to fantasy and entertainment. Far from looked upon as good material from which producers could prospect for stories (too much political tightrope walking, too great a risk for offending the public), nevertheless Hollywood was forced to acknowledge the elephant in the room. But the movies interpreted The War on its own terms: the war as melodrama, the war as romance, the war as comedy.

This blog, because it examines old movies within the context of the times in which they were filmed, shovels around a lot of history, which I know may be off-putting for some old movie buffs who just want to reminisce about favorite films or actors. But, I think without the history background, a good chunk of the pleasure of watching old movies, i.e., really understanding context, is lost. Many plots and conflicts transcend time. Many just don’t, and to appreciate them we need to bend their way rather than require they conform to our modern understanding.

Imagine sitting down to eat a pizza, everything on it you like.

Now imagine you have no taste buds.

If you eat it, you’ll still get all the calories. You won’t feel hungry anymore.

But you will have tasted nothing. It will be like eating the box it came in.

Watching an old movie without “getting it”, is like eating a pizza when you have no taste buds.

Understanding the background is what puts the color in a black and white movie. 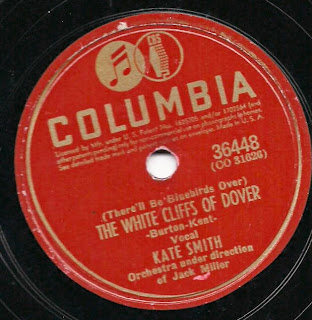 Almost every line of dialogue, every costume or set piece in any old movie you’ve seen was for calculated effect. This is especially poignant when we watch “war stories”. 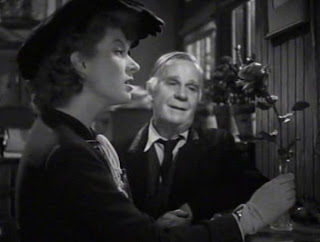 “Mrs. Miniver” starts our home front experience in England in the early days of World War II. The United States was not involved in the war at the time of the setting of this movie or even when filming began. Yet by the time the movie was shot and in the can, we were at war. It is famously and repeatedly referred to as propaganda, though in another post we discussed that this label is not entirely fair or accurate. We'll get a little more into that on Thursday.

The next movie, “The More the Merrier”, finds us in Washington, D.C. during the middle of the war. This film is a romantic comedy, but it shows some enlightening aspects of wartime tension, and entertaining scenes of sexual tension. 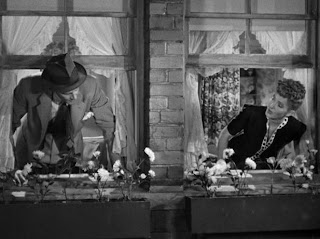 We see a decidedly different skew on home front patriotism in this movie. Where “Mrs. Miniver” gives us a certain stiff upper lip British pluck, “The More the Merrier” shows a more quintessentially American attitude that was evidenced during World War II. It's not exactly laid-back, and it is certainly just as patriotic, but there's a more chip on the shoulder attitude. We get repeatedly, if subliminally, the message that strife is congenial and that real patriots don't whine. An attitude we might benefit from today.

Both attitudes, to some extent, were whistling in the dark.

The final movie, “Love Letters” takes us back to England in the later days of the war. 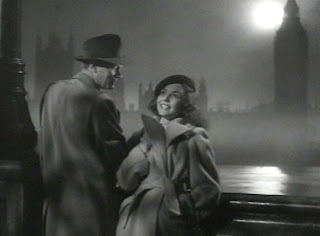 This is also a romantic movie, but it is not a comedy. It is a melodrama that involves amnesia, and mixed up identifies and murder all against the backdrop of that peculiar fatalistic weariness that happened at the close of the war when everyone was not so much looking not for victory, but for a little peace and quiet. These characters just want to go to sleep for a little while. And forget everything that happened.

So join us on Thursday for “Mrs. Miniver” and the other two movies following next week. You won't need to pack up your troubles in your old kit bag, but you will need to bring along your ration books, and your patience, and your empathy. 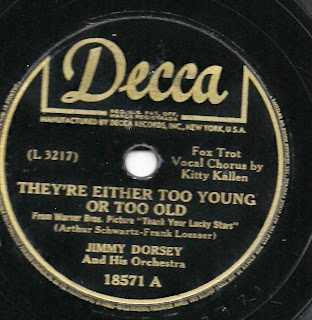 Posted by Jacqueline T. Lynch at 7:31 AM

Jacqueline: I am in your camp on this and find, as you do, that many, when viewing films, “require they conform to our modern understanding.” Rather, they might turn the clock upside down and learn the period (grass roots history is a good start), learn the attitudes of the times, and equally important (as you imply) learn where the studios were trying to fit their product – remembering, in most cases, that sales were the coin of their realm. You defined the situation well. My wife particularly liked the pizza analogy.

I look forward to your series for many reasons. I was seven when that Sunday morning became hell at Pearl Harbor. The War was the watershed experience of my life -- and I was born in the middle of the Depression. Three of my uncles fought in the African and European theatres; other family friends were scattered throughout the world. I remember the music, of course, but being a young boy, more likely the novelty numbers than the moving classics we now treasure. And the war films were to me, age seven through eleven, very much the reality of war.

Also, my wife and I spend two months each year in England and have been fortunate that our English friends have shared some of their childhood wartime experiences. And our time there has allowed us to trace the roamings of the great London (and Brum) wartime diarist, Vere Hodgson. “Few Eggs and No Oranges” is essential, I think, in helping understand the London home front.

I have seen, multiple times, the three films you will cover. An interesting and different choice is “Love Letters,” which is part of Dieterle’s romantic foursome to which I am partial. Those four films were all done within a seven year period.

Some moments I remember are not those one might expect. I was born and raised in the Bronx and a modern tool (Google Earth Street View) allows me to revisit images of buildings still standing that were there during The War. Such imagery helps evoke memory. And I am quite cognizant of problems posed by a seventy some year old memory. Yet I hope the nature of my work allows me to overcome some pitfalls. And, of course, we all remember a different War. I look forward to your series. Best. Gerald

Gerald, thank you so much for this evocative trip through your own memories of that era. I am very much interested in World War II through a child's perspective. In fact, I have a project on the back burner which I intend (at this point) to be a book-length examination of children's books during the war which dealt expressly with the war. I may announce that on this blog in a few weeks to elicit some opinions and aid. I hope we can talk more then.

For now, I hope you enjoy the series, and thanks so much again for commenting.

Really enjoyed your post and look forward to your series. As both a serious film fan and a one-time history major, I very much agree with your comments on context.

By coincidence, one of my kids just watched THE MORE THE MERRIER yesterday. :) I've seen that and MRS. MINIVER many times, but have not yet seen LOVE LETTERS.

What an interesting idea about children's books written during the war. One of my favorites along those lines is Carolyn Haywood's PRIMROSE DAY, which a Google search shows was published in 1942. Are you familiar with it? It's about a little English girl evacuated to the U.S. during the war. When I was at the Imperial War Museum in London last year, I bought a couple books on the topic of children being evacuated during the war, and they immmediately made me remember PRIMROSE DAY.

Forgive me, I mean Gordon, of course.

Thanks so much, Laura. I've not heard of "Primrose Day", but from your description, I've got to get my hands on a copy.

How funny that one of your children watched "The More the Merrier" yesterday. I was surprised to learn that Jean Arthur did something like 89 movies, but only a handful are released to DVD. I suppose most are from her earlier period of lesser films, silents and westerns, but I'd love to see more of them.

I love this idea - a very specific and concrete reality filtered through the dream machine. I find this sort of "mythologizing" process fascinating and often very revealing, sometimes more so than a movie which explicitly sets out to "be real." Looking forward to the rest of the series.

Thank you, MovieMan. I think you put it very well, about the mythologizing process. I suppose we could examine westerns in the same way. A whole heap of mythologizing going on there. Some genres lend itself to it.

"...shovels around a lot of history, which I know may be off-putting for some old movie buffs..." - Jacqueline

Who are these Philistines? :)
To the contrary, I find people enjoy when someone does more than discuss the plot. Do fill it up with context, please.