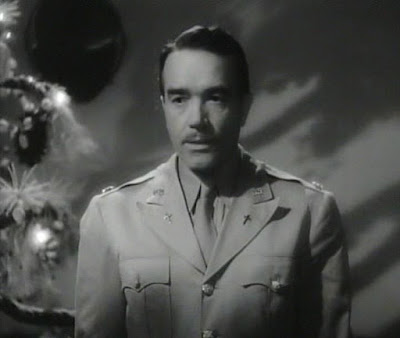 “Boy!  Are we happy!” Walter Abel yells during yet another clutch moment in Holiday Inn (1942) as the conniving, frenetic talent agent in a performance that is delightful and exhausting.  In contrast, his scene in So Proudly We Hail! (1943) as the chaplain is controlled and deeply emotional for being so.  Both roles leave us with a Christmas theme appropriate to this time of year. 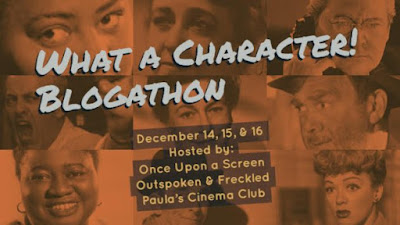 This is my entry into the What a Character! Blogathon hosted by those wonderful classic film bloggers Aurora, Kellee, and Paula.  See the link for details and please visit the other great blogs participating in this fun event.


Walter Abel was in his forties at the time he 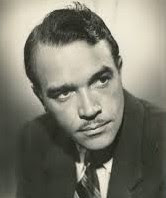 performed in those two films, with a long career of varied roles behind him.  His first film was in 1918, but he spent the 1920s on stage and appeared in many prestigious Broadway hits by the time the Great Depression rolled around, and Hollywood provided a safe haven for many out-of-work stage actors. 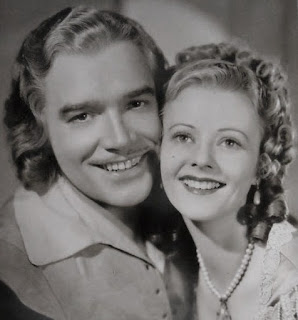 One of his most important roles in that period is in The Three Musketeers (1935), in which he played the swashbuckling and romantic D’Artagnan.  Those of us so used to seeing him in a variety of comic or quietly authoritative roles—which seemed to suit him equally like the toggling of switch, might well be surprised to see him as a young, athletic heartthrob.  He was worthy of lead roles, but he was one of those actors who managed to turn even a small character part into the lead for even just a few moments. 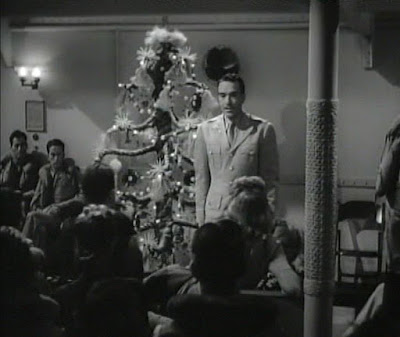 Take his scene in So Proudly We Hail, which we previously discussed here:  A group of Army nurses are on a ship bound for the Philippines during World War II, and he is the company chaplain.  On Christmas Eve, 1942, only a few weeks after the bombing of Pearl Harbor that has dropkicked civilian America, and its previously peacetime army, into a frightening new sphere, Walter Abel conducts a makeshift Christmas party on board ship.  Standing next to a goofy-looking rope Christmas tree in a lounge cabin cramped with service personnel, including rescued crew of a torpedoed ship, the chaplain starts off the party with a few words of encouragement, wrapped in a kind of prayer.


“You must forgive me for being sentimental. We’re a sentimental people, and I think we’re proud of it. Despite the fact that our enemies deride us for it, it makes us stronger… All I want to say in the tragedy all about us is—have faith. Not a blind faith, but a faith in those things in which we believe.  We must have faith in these things, such faith in ourselves, such faith in mankind…that we will fight to the death to make those tender and sentimental beliefs like Christmas a reality forever.  Now, God Bless us, everyone.”


His delivery is measured, with a slightly wavering voice that is tender and emotional.  Later on in the movie, he will perform a marriage ceremony between Claudette Colbert and George Reeves in which his delivery and diction is so precise it sounds almost Shakespearian.


But the Christmas party speech, a kind of Cliff Notes of the “Wilcoxon Speech” from Mrs. Miniver (1942), is quickly followed, characteristically, by a rousing instrumental swing version of “Jingle Bells” just so we aren’t embarrassed. 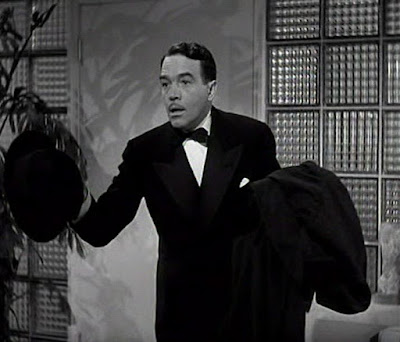 In Holiday Inn, he must have dropped 20 pounds for all the running he does, and he illustrates his character’s excitement with his whole body, jerking, shrugging, throwing himself into double-takes.  One of my favorite lines is when he attempts to describe an arrangement of orchids he orders from a florist, “A dozen, loose, looking like they don’t care.”


And his covering for yet another lie, “But now I’m sincere!” 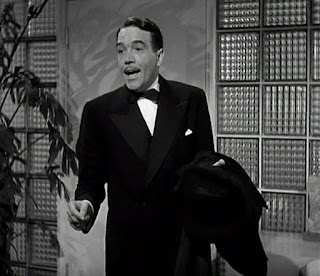 In the 1950s, Walter Abel, with that marvelous speaking voice, performed as a concert narrator for the Philadelphia Orchestra under conductor Eugene Ormandy in Aaron Copland’s Portrait of Lincoln.  I wish I could have seen that.  If anybody knows if that was recorded, let me know.


Please visit the other blogs participating in the What a Character! Blogathon hosted Aurora, Kellee, and Paula.
Posted by Jacqueline T. Lynch at 6:48 AM

Walter Abel is a favourite around these parts. "Loose. Lookin' like they don't care" often pops up in conversation for no other reason than it is fun to say. I love that Abel's career allows us to enjoy him from the 30s up to the 80s. Hooray for the movies!

Have you seen Two in the Dark? Abel is wonderful as an amnesiac with a worrisome present. It was remade as Two O'Clock Courage with Tom Conway in the role.

I enjoyed reading this SO much. It's fun learning about an actor you thought you knew pretty well, but really didn't until you read an article like this.

CW, I have yet to see TWO IN THE DARK, but it's on my radar.

Sarah, thank you very much. I agree, and it's funny, but the actors in the old studio system had such interesting careers, did so much more than we realize.

Hey, I know that guy! Seems he's been there forever. Wonderful and informative post about "that guy" that seemed to be everywhere across the decades.

Great read! I just found more additions to my "need to see" list.

Thank you FlickChick and J-Dub. "That guy" is great to have around.

Thank you for putting a name to another face that I need to know better. He was very familiar to me and I think I first encountered him in The Lady Consents when I was watching everything Herbert Marshall was in. I do think he’s very handsome and can see him as a leading man—I’ll have to check out his version of The Three Musketeers!

Walter Abel was just so versatile! He could play a humorous role like the one he did in Holiday Inn, and then deadly serious roles like the DA in Fury. I always thought Walter Abel was handsome enough that he could have been a leading man, but I am glad he wasn't. We would have missed him playing so many great character roles.

Wonderful choice of topic. Abel is one of those guys who could play anything, but seems largely by the '40s to have been relegated to sidekick roles (with So Proudly We Hail an exception). I have to watch his D'Artagnan, definitely. I love him in Mr. Skeffington. Funny, Fanny and poor Job age a couple of lifetimes, but Cousin George looks exactly the same as he did at the beginning of the movie.

Jocelyn, Terence, and Lesley, thanks for stopping by. It's great to know there are so many Walter Abel fans. I loved hearing about the roles for which you most remember him.

I love how Abel could play it from straight to slapstick comedy. Such wonderful range that sometimes you see him enter an opening scene and not know which way he's going at first. Wonderful piece! Thanks so much for signing up for our blogathon!

Thanks, Kellee, for hosting this great blogathon again.

I'm belatedly catching up on blog reading and/or commenting from the busy Christmas season and wanted you to know (at last) how much I enjoyed this! Abel is someone I've come to appreciate more and more with the passage of time. ISLAND IN THE SKY was a title where I first started paying more attention to him. I second the recommendation of TWO IN THE DARK! Thanks for shining a spotlight on his fine work.

Thanks and best wishes,
Laura

Thank you for the kind words, Laura, and for sharing what I expect is the growing admiration of many classic film fans for this wonderful actor. I think it would be great if TCM could devote a day to Walter Abel.